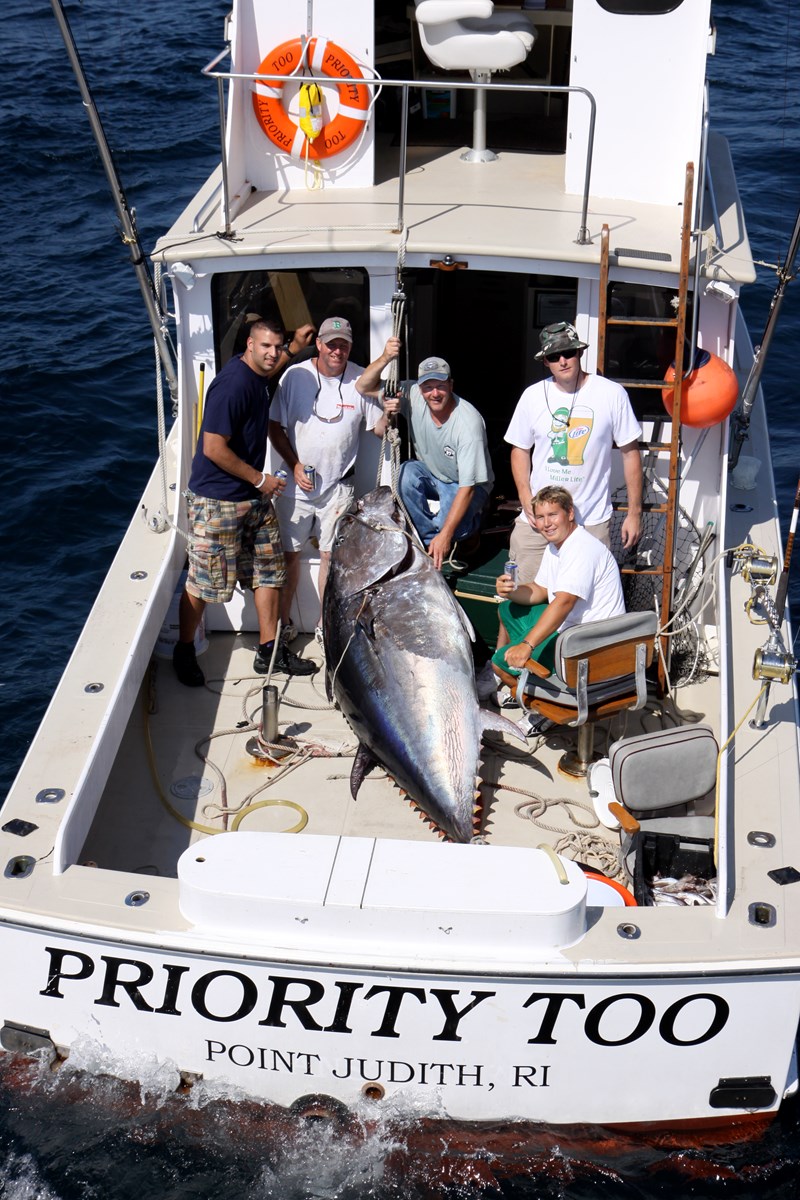 Tom Young, his son Chris and a few of Chris’s co-workers from the ACI had scheduled a shark fishing trip on Monday Sept. 14th. When we arrived at the Mud Hole, where we planned to pick up some fresh bait, we spotted several giant tuna crashing some whiting and hake which the commercial draggers had discarded. We did not have the proper fishing rods on the boat to handle fish of this size, but we tried anyway. The results were not so good. We hooked up to a big fish and after only a few frantic minutes we broke off the fish.

After a cancellation for the following day’s trip, the same crew opted to go out and give it another shot. What a great decision that turned out to be. I spent the evening preparing the big fishing poles and met the weary crew at 5:30AM sharp. We steamed right back to the Mud Hole and after repositioning one time, we hooked up with a really big fish.  The fish, which was one of about a dozen fish swimming on the surface,  ate a red hake which I had floated about 10 feet off the transom of the boat.

The fish tore through 100 yards of 300# top shot and was into the backing before I could make my way to the bridge and begin chasing the fish. Now the battle was on, we settled into a 3 hour tug of war where the fish slowly made its way closer to the boat. The anglers did a great job keeping a nice bend in the rod and allowed for the size 11/0 hook to stay buried in the corner of the fishes mouth.

The weather cooperated, the fish stayed away from the lobster gear, and the line held up. After what seemed like an eternity, the fish was by the side of the boat, where I stuck it with the Harpoon and we worked to get a tail rope around the beast. It took another hour to bleed the fish and rig a way to hoist it into the cockpit. WE DID IT!!

After spending some time visiting friends in the area, to show off of course, we headed for port. Snug Harbor Marina was where I decided to haul out and that was our opportunity for pictures and high fives. What a great fish, great day, great crew.